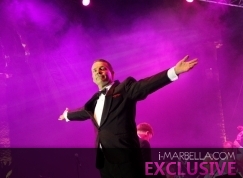 The Millionaires Summer White Party was held on the 30th of July in Marbella with amazing performers!

Saturday 30th July presented an opportunity to be totally entertained for an 8 hour period in a dream location by not one, but 5 International Acts. The Millionaires Summer White Party, “Live from Las Vegas”, in the grounds of the jasmine scented Finca La Concepcion was shaped up to be the Event of the year and a welcome new addition to Marbella’s social calendar.

As the beautiful people, dressed in cool, casual white, sipped champagne at the opening cocktail party, pianist Paul Maxwell was onstage playing songs from the heyday of Las Vegas on the Grand Piano. As the sun set and guests took their seats, the “Live from Las Vegas” 17 piece Big Band was introduced by comperes Oscar Horacio and Angela Cid.

The interval of the singers gave guests the chance to visit one of the themed bars or food concessions that was dotted around the specially lit gardens - the lighting was under the supervision of Lighting Director Mark Kenyon, who is the L.D for UK televisions X Factor and Strictly Come Dancing.

The first International entertainer was Maxine Barrie, who not only sounds like, but looks like, Dame Shirley Bassey. As Robin Duke from the Stage commented, “Maxine Barrie looks and sounds superb with some of the Dames best moments, complete with facial mannerisms, waving arms and knowing winks”. From Big Spender to This is My Life, this was definitely an hour of pure magic.

No evening from Las Vegas would be real without Showgirls, and at that night everybody witnessed the Las Vegas Showgirls, 8 stunning beauties in full costume, lead by the delectable Anna Sologub!

The next Act was in a class of it’s own, Stephen Triffitt as Frank Sinatra accompanied by the Big Band. Five weeks ago he sung “My Way” live on the national Spanish TV 5 Show “Qué Tiempo Tan Feliz”, and was given a standing ovation by the studio audience. Not surprising then that he has appeared at The Main Event in Atlantic City, The Venetian, Las Vegas, and in the highly acclaimed West End smash “The Rat Pack Live from Las Vegas”, as well as selling out the London Palladium for 2 nights. As if this isn’t enough he performed at music impresario Simon Cowell’s 50th Birthday Party and again at Simons Mothers 80th. Truly a class act!!!

The Event had a title sponsor in the form of Chopard, and to remember those less fortunate in the World, there was a tombola with 2 Chopard timepieces as the two main prizes, all the proceeds were donated to the Japanese Red Cross Tsunami Appeal, through the Marbella Rotary Club and the cheque was accepted by Saeko Hamada.

The Evening then took another turn and became the After Show Party. Mr. Eric Conley, sang the hits of soul man Barry White accompanied by the Unlimited Love Orchestra. Eric comes from a gospel background and for many years toured with Grammy winner Peabo Bryson, recently he was asked how many people he has performed to, and his reply “I just played to 80,000 people at a festival in Belgium”, delivered in a voice that couldn’t get any lower if it tried, sums up this charismatic entertainer; let the music play!

To take us up to 4am, one of the best loved DJs of his genre and one of London’s most well known and respected DJ’s - Rusty Egan. From Blitz and many others, it was the one and only Rusty Egan recreating the classic sounds of Studio 54, ‘70’s disco music; lets party! Thank goodness it’s going to be an annual event. Now that’s entertainment, see you all next year!

Number of Millionaires in Spain (1)