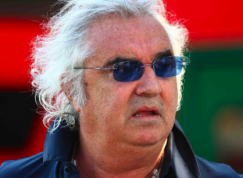 
The documentary film "The Four Year Plan" is the story of Flavio Briatore's colorful career at Loftus Road as co-owner of QPR.

After being forced to resign from Formula One after a race-fixing scandal, Briatore became co-owner of the team.  During his four-year stay he changed managers 9 times, interferred in selection of players and tactics during games, and demanded the names of fans who booed him at the stadium.  900 hours of behind-the-scene footage was edited to make this documentary.

"The content from start to finish is incredible", states one member of the production company.  It is referred to as an unprecedented stury of a football club. Expected to attend the premiere are the team manager, some players and the billionaire team backer.

The film will be shown on Sunday, October 16th at 3:00 at the Hotel H10 Andalucia Plaza in Marbella.  For more information of the festival check the web site www.marbellafilmfestival.com