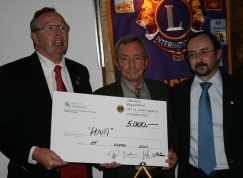 The first demonstration of their charitable work was the delivery of a 5,000€ cheque addressed to those involved in the terrible earthquake in Haiti. The money will arrive in the safest and most direct way as it will be taken by Don Daniel Dans, former security chief of the UN and member of the Lions movement.  Dans has spent several years in the disaster area and is about to move there.

Various other charitable projects were also introduced which will now be able to count on the support of the four Lions clubs.  One of their main goal conc erns is raising money for the 'butterfly children'.  A mini-marathon six miles in length, entitled ´Help to help´has been scheduled for March 6th on the Paseo Marítimo and counts on the support of Marbella Town Hall.