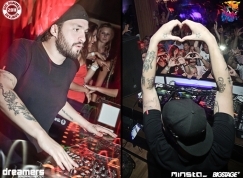 Steve Angello (aka Steve Josefsson Fragogiannisis), who is part of the Swedish House Mafia, performed at Dreamers in Puerto Banus on the 28th July.

Swedish/Greek Steve Angello began his career in music on the turntables, mixing hip-hop, break-beats and 70´s classics before moving on to the various styles of House music. In 2004, Angello´s claim to fame came when he released his remix of Eurythmics “Sweet Dreams”. Since then he has exploded onto the house music scene with massive club hits such as the remix of Robin S “Show Me Love” in 2007. He has also released the tracks “Valodja”, “Flonko” & “Swing N Swoosh” with his brother, Antoine Josefsson, who is also a DJ and producer who goes by the name AN21.

Other than his solo work, partner work, and touring, he has also made time to remix for mega artists such as Justin Timberlake, Moby, and Royksopp.

In 2009 Steve Angello released ‘The Yearbook’ – a collection of his finest production work to date which became a mile stone in his career with offers to work with him coming from Pharrell Williams, Cheryl Cole and Kid Sister. His latest remix of Magnetic Man’s ‘Perfect Stranger’ has been named Hottest Record in the World by Zane Lowe and his latest solo project , the bass heavy ‘Knas’ has been played at every festival arena in the world.

The last of the Swedish House Mafia lands in Marbella