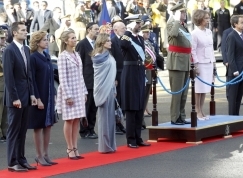 Spain celebrates its national day on October 12, the day in 1492 when Christopher Columbus discovered America and the day which is dedicated to Nuestra Señora del Pilar, Our Lady of the Pillar, the patron saint of all Hispanic peoples and of the Spanish Civil Guard. The day is celebrated in Latin America as the Día de la Hispanidad and is known as Columbus Day in the United States, to celebrate his discovery of the New World.

October 12 has been officially observed as Spain’s Fiesta Nacional since 1987, by a law which describes it as a celebration of political cooperation, of cultural heritage and the affirmation of state identity and the special national quality of all Spaniards. It is a public holiday across the country.

The main event every year is a military parade in the Spanish capital, presided over by King Juan Carlos I and Queen Sofía, accompanied by other members of the royal family, the Prime Minister, the Presidents of Congress and the Senate, government Ministers and other national, regional and local dignitaries.

The celebrations start at 10.30 am in the Plaza de Neptuno where the Spanish flag is raised, and where homage is then paid to those who have given their lives for Spain. The military parade then begins, with a new route this year to give more spectators the chance to attend. It starts from the Glorieta Emperador Carlos V and ends in the Plaza de Colón, and is 600 metres longer than the route for 2010. More than 3,000 soldiers will be on parade this year, and there will be a chance to see the Eurofighter fighter aircraft, the Leopard combat tank and the armoured personnel carriers which are used by the Spanish Armed Forces on missions abroad.

There is also the traditional display by the Spanish Air Force aerobatics team, the ‘Patrulla Águila’, whose parachute team will land in Madrid’s Plaza de Neptuno carrying the Spanish flag. The government’s aim for the 2011 celebrations is for a more civic Fiesta Nacional, with free entry for the public to many museums, palaces and monuments in Madrid. The open day for museums includes the Prado, the Reina Sofía, the Thyssen-Bornnemisza, the Sorolla Museum, the National Anthropology Museum and the National Library in Madrid. Elsewhere in Spain, there will be free entry on October 12 to the Sefardí and El Greco Museums in Toledo, the Colegio San Gregorio and the Casa de Cervantes in Valladolid, the Museum of Roman Art in Mérida and to the Museum of Underwater Archaeology in Cartagena.

There will be free entrance to a number of palaces in Madrid, including the Madrid Royal Palace and the Palacio Real de El Pardo, and to the Royal Monastery of San Lorenzo de El Escorial. The Cervantes Institute on Calle Alcalá will host five concerts in the evening, where groups from different parts of Spain will be performing hip hop, electronic and rock in the co-official languages from their regions.

The full programme of activities for the day can be downloaded from the government’s web page for October 12 www.12deoctubre.gob.es