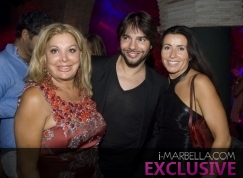 For everybody who love Flamenco, Joaquin Cortes is the the King of this passionate dance. Described by the BBC as "the sexiest Spanish icon since Antonio Banderas", this 41-year-old Spanish superstar has travelled the world with the Spanish National Ballet, performing in important venues such as the Cosmopolitan Opera House of New York and the Kremlin Palace in Moscow. Cortes has frequently been invited as a guest of honour to perform in movies, concerts, and award presentations. He is recognised for not only his prowess as a dancer, but also as a choreographer and artistic director.

Cortes' private life is as much in the headlines as his dancing. His romances have included liaisons with the supermodel Naomi Campbell, Hollywood actress Mira Sorvino, and Mick Jagger's former lover Luciana Morad. Among his many fans are Madonna, Jennifer Lopez, and the actress Emma Thompson. According to the publicity material, Elle Macpherson called him 'pure sex'. And the Italian film director Bernado Bertolucci has written an ode to him.