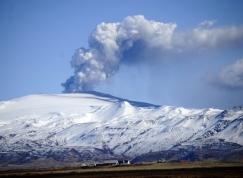 
A team from the CSIC has been on site to inspect the situation.

Spanish scientists from the CSIC, the Spanish High Council for Scientific Investigation, have been on site in Iceland investigating the Eyjafjalla volcano.

They have concluded that there is no sign of an end to the eruption, and that the negative effects on European airspace are set to continue, although the impact will be unbalanced and dependent on several items, the state of the magma, explosive intensity and the weather.

The CSIC experts say in their report that the expect the eruption to continue with new magma reaching the service and more columns of gas and ashes being released to the atmosphere reaching a height of between six and seven kilometres.

Volcanic ash from Icelandic eruption could reach Spain on Thursday