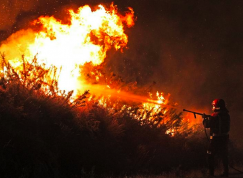 
Much of the country will see more than 30 degrees on Sunday.

Parts of Spain are on yellow alert for high temperatures on Sunday, as the mercury climbs to over 30 ºC in all of the country, except the far north where showers are expected. Alicante, Murcia, Granada and Ciudad Real are on yellow alert, with temperatures expected to reach as high as 38 degrees, according to the Spanish State Weather Agency, AEMET. A total of 25 provinces will see highs over 30.

Several parts of the country are also on alert for the danger of forest fires. Daytime temperatures will climb in the NE of the mainland, Valencia region, and the N and NE of Mallorca, as well as the Basque Country and north of Navarra.

However it will be slightly cooler in the SW of the mainland, and night-time lows will be generally fresher than of late. There will be cloudy intervals too on the north and east of the Canaries.

Moderate easterly winds will cover most of the country, with the exception of the Levante and Baleares where winds will be variable and on the Canaires where they will be NE and moderate.

Civil Protection has issued a red warning for forest fires, their highest possible classification, for areas of Castilla-La Mancha, Castilla León, Valencia, Cataluña, La Rioja, Navarra, Basque Country, Murcia, Extremadura and Galicia. Practically the rest of the country is on orange or yellow alert for fire danger, and those in the countryside have been called on to not light and fires or bar-b-ques. Camping should only take place in authorised zones.