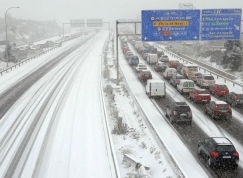 
Heavy snowfall throughout the country has caused chaos with flights and eight high-speed train services had to be cancelled yesterday in Madrid.

Heavy snowfall caused the closure of two of the four runways in Madrid´s Barajas Airport, a spokeswoman for AENA stated that they had to be closed due to poor visibility.  Barajas is the fourth busiest airport in terms of passenger traffic and 27 arriving flights and 26 departures had to be cancelled causing chaos for holiday travelers.

Eight High-speed train services were pulled between Madrid and Barcelona, Malaga and Seville because of the adverse weather conditions.

Travel on many of the capitals roads was problematic with traffic crawling at greatly reduced speeds.  More extreme conditions are expected over the next few days.