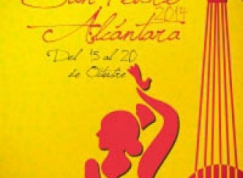 The Feria de San Pedro Alcántara during 15-20 October features performances of Chenoa and Camela in a full program of activities for all ages.

Councillor for Fiestas, Diego López, introduced the program of activities of the Fair and Festival of San Pedro Alcántara, which runs from 15 to 20 October.  Diego López said that "a very careful program has been designed for everyone from children to the elderly, who all can enjoy the activities of the fair and spend a few pleasant days in the company of family and friends."

Between musical performances, Lopez stressed that there will be a free concert by the singer Chenoa on Friday October 17, at 23.00 in the Caseta Municipal, where she will present her latest work and sing her most popular songs.

The second big musical event is the concert of Camela and that will take place on Sunday 19th October at 23.00 in the Caseta Municipal and its also free of charge. The group will present their new album 'More than you think' inspired by Bollywood.

The council has said that the show will feature an exceptional prevention device thanks to the local Civil Protection Service and recalled that this year will continue to offer service wristbands for children.

He stated that the program will start on Wednesday 15 October with the opening of the Exhibition Centre, fireworks display and reading of the proclamation by the athlete Javier Mérida, Lopez has been defined as "a clear example of struggle and overcoming" . Later there will be the awards contest showcases the bands crowning and imposition of the Queens, Ladies and Miss Congeniality and the election of the Reina Popular.

Within the program, the mayor stressed section dedicated to children, who can enjoy the traditional Children's Party on Thursday, October 16 at 17.00 in Caseta Municipal and Monday October 20, at 18.00, there is a children’s musical  'Dancing' in Caseta Infantil. Moreover, there will also be theatre, makeup workshops, juggling, storytelling and making of toys, among other activities.

The full program is available at fair www.marbella.es/fiestas.