San Pedro tunnel to be finished by Christmas 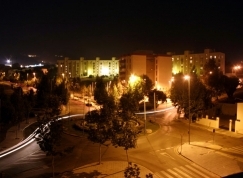 
The company carrying out the work on the San Pedro Alcantara underpass, OHL, has told the town hall that it will be finished by December this year.

The project affects six kilometres of the A-7 motorway as it passes through San Pedro. But San Pedro’s Deputy Mayor, Miguel Troyano, has expressed his doubts over being completed within the next few months.

OHL has promised that before the end of the summer, the surface work will be completed and efforts will be focused on the tunnel, which will be one kilometre long. The Ministry of Public Works, which is financing the project, gave it a budget of €65m, which is plans to stick to, as well as the prevision of completing it before 2012.

Work began more than four years ago in order to stop the motorway from dividing the area in two, and do away with the need for traffic lights and pedestrian crossings to make traffic flow more fluidly. The Town Hall plans to complete the project with the creation of a 90,000 square metre park costing €6m above the tunnel.

Alia 15-08-2011 00:42 I will believe this when I see it! I don't want to think of how many extra miles I have driven simply to turn around to go home, nor at how much more petrol I've had to put into the car just because this stupid thing has not been finished when it should have been.
0