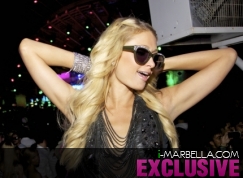 
Paris Hilton is set to make her public DJ debut at the Pop Music Festival in Sao Paulo, Brazil, sources have confirmed to Celebuzz.

Paris Hilton, 31, will be the closing performer (DJ) at the June 23 festival, which will also feature performances by fellow A-listers Jennifer Lopez and Kelly Clarkson.

Paris is part of the tight-knit DJ group and has built some very good friendships including Afrojack, Kaskade, David Guetta, Avicii, Tiesto, Swedish House Mafia, Calvin Harris, and Will.I.am. She’s had the opportunity to travel the world attending every festival and rave. Her music will be more than impressive.

Just how hard has the heiress been preparing?

Sources declare that "everyone is excited to book her! She provides another great attraction and a great reason for people to go to the clubs".

Since it’s launch in 2011, the Pop Music Festival has quickly become one of the biggest attractions in the world. In addition to J-Lo and K-Clo, fans this year will be treated to performances by Michel Telo and Cobra Starship.

Paris Hilton behind a booth can't get any cheesier. Incredible for Marketing any Nightclub around the World. Now my question is… Does this make justice to hardworking young producers with a dream? Dating Afrojack doesn't make you a DJ...

She can do whatever she wants... I'm sure she will soon be highest paid DJ too...