Ryan air to open new base in Málaga 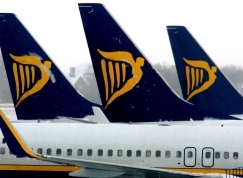 
Ryanair announces that it will open its 38th base in Malaga Airport in June 2010.

“Ryanair is delighted to announce Malaga as our 38th base with 19 new routes from next June which go on sale on www.ryanair.com today. With a total of 39 low fare routes from Malaga next summer Spanish consumers and visitors can beat the recession by choosing Ryanair’s lowest fares and our no fuel surcharge guarantee on 39 exciting destinations all over Europe including France, Italy and Germany among others. Ryanair’s 2m passengers p.a. will sustain 2,000 jobs locally at Malaga Airport”.

According to Ryan Air, there will be 4 based aircraft and 19 new routes (39 in total) being launched. Ryanair will create over 200 direct jobs and offer 360 weekly flights to/from Malaga in an investment of over $250 million in the airport.

Celebrating the new base in Málaga, Ryanair is releasing 500,000, €5 January seats for travel on Tuesdays, Wednesdays and Thursdays on 500 routes across its European network in the new year. These €5 seats are available for booking on www.ryanair.com until midnight tonight (17th December).