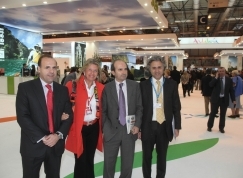 
The mayor reaches agreement with Persian Gulf Tour Operators at FITUR in Madrid.

Last week in Fitur, Mayoress Ángeles Muñoz announced that the Town Hall of Marbella signed an agreement with Persian Gulf tour operators at the International Tourism Fair (FITUR) held in Madrid. The Mayoress explained that this agreement "will help to promote tourism within the region, taking advantage of the air links between Spain and the Gulf countries that is aiding the flow of tourists. "

This agreement is similar to the one signed last year with Dubai and reinforces "the excellent relations we have with those countries since for many years Marbella houses many royal homes in the area."

Muñoz clarified the objective of "continuing to work with different markets" as well as maintaining relations with German and Nordic tour operators and outlining a promotional campaign with Madrid "to serve as reference point to extend to other cities nationwide".

Muñoz stated that Marbella faces the future with "optimism and the guarantees afforded by the adoption of the new General Plan and the association of the city with sport"and stressed that the General Plan "is essential" for improving tourism and revitalizing the residential segment. On the sporting field Marbella announced that this year will host the cycling races in Spain and Andalusia, the professional tennis tournament on the WTA Tour, Cup of Vela Platú and work is underway to hold the Banesto women's golf championship .

Felix Ramos at FITUR 2014 in Madrid