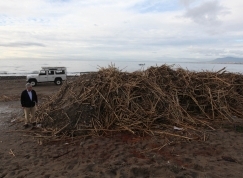 
The delegate for the Environment has urgently requested that the Andalusian Mediterranean Basin (la Cuenca Mediterránea Andaluza) organize cleaning of river bed streams which have ruined the Costa del Sol´s beaches after the recent torrential rains.

Yesterday in Marbella, Environment Councilman, Antonio Espada, commented that the City Council has launched a special cleaning force "to resolve the situation of the beaches" in order to clean the beaches after the recent rains. Antonio Espada, added that "the situation has been aggravated by the reeds and weeds from streams" and has stated that the Government Team has asked la Cuenca Mediterránea Andaluza three times to "to assume jurisdiction and clean channels" but without any response.

Espada explained that the cleanup work began two weeks ago and is expected to continue for a further fifteen to twenty days, but has indicated it will require a second phase "to dig and remove the reeds that are underground”, so the action could last longer than two months “to leave the coast in perfect conditions”.

The force is composed of twenty operators who are using three tractors and a loader machine.  Although the cleanup is being conducted on all the beaches in the municipality, the team are working intensely in the areas that have been the most affected between Arroyo Segundo and Cabopino.

The town councillor insisted that "if the Andalusian administration had not acted with such carelessness and had cleaned the channels as had been requested, the beaches would not look like this”.  He recalled that on the 25 September 2009 in which the Government Team, through delegation of Environment, filed a motion in this regard, the Municipal Socialist Group voted against it.