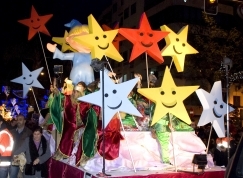 Thankfully the rains subsided and the inclement weather held off for the Three Kings Parade yesterday.

The tradition of the “Cabalgata” procession takes it´s roots from Western Christianity celebrating the Magi on the day of Epiphany, January 6th, following the twelve days of Christmas.

In Spain the children write wish letters to “Los Reyes Magos” to bring them presents, each one of the Magi is thought to represent a different continent, Melchior from Asia, Balthasar from Africa and Caspar from Europe.  According to custom, Los Reyes Magos come from the orient on camels and magically bring the children their presents in one night, similar to the tradition of Father Christmas and his reindeer which appeared much later.

Almost every town organizes “cabalgatas” where the kings and their servants throw candies to the children.  The Cavalcade of the Three Kings in Alcoy is thought to date back to 1886 and is the oldest in the world.

Yesterday in Marbella, the children’s eyes lit up as the Kings threw their sweets to the eager children.  According to the Town Hall, 15.000 kilos of sweets were shared out between Marbella, San Pedro de Alcántara and Nueva Andalucia, some 2.000 were donated by El Corte Inglés, Leroy Merlin, Sanyres, Vinci, USP Hospital de Marbella, amongst others.

This year the 18 carriage procession was taken from our favourite fairy tales; Snow White and the Seven Dwarfs, Alice in Wonderland, Mickey Mouse, The Chronicles of Narnia and Winnie the Pooh, Ratatouille and Sponge Bob also made their appearance.

Before the parade, The Kings visited local hospitals in the area bringing huge smiles to the faces of the children.

The Ride of the 3 Kings in Marbella