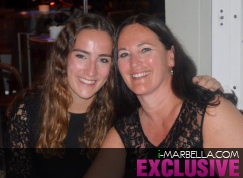 
On November 10, 2014, the guests of La Sala Banus were able to enjoy Adele Tribute.

Adele (born 5 May 1988) is a British singer-songwriter. Her debut album, 19, was released in 2008 to commercial and critical success. Adele released her second studio album, 21, in early 2011. The success of 21 earned Adele numerous mentions in the Guinness World Records. Adele is the first female in the history of the Billboard Hot 100 to have 3 singles in the top 10 at the same time as a lead artist, and the first female artist to have two albums in the top five of the Billboard 200 and two singles in the top five of the Billboard Hot 100 simultaneously. 21 is also the longest running number one album by a female solo artist on the UK and U.S.

La Sala has truly become the ultimate social and dining experience and is renowned as one of the busiest restaurants in Andalucía, an accolade successfully retained all year round not only during the traditional summer season. It's unparalleled formula has attracted a mass of international media and confirmed its position as Puerto Banus's premium hotspot thus welcoming celebrity figures and playing host to an array of television shows and documentaries broadcasted worldwide.

For reservations at La Sala call 952 814 145 or e-mail at Reservations@LaSalaBanus.Com

sarahbarbara175 09-01-2018 00:12 URGENT EFFECTIVE LOVE-SPELL TO GET YOUR EX BOYFRIEND/GIRLFRIEND BACK FAST. Unityspelltemple@gmail.com is certainly the best spell caster online, and his result is 100% guarantee.
I am Sarah Barbara from USA, after 4 years of relationship with my boyfriend,
he broke up me and brought in another Girl, i did all i could to get him back
but all proved abortive, I was really upset and i needed help, so i searched for help online and I came across a
website that suggested that Dr Unity can help get ex back fast. So, I felt I should give him a try. I contacted him and he told
me what to do and i did it then he did a (Love spell) for me.
28 hours later, my boyfriend really called me and told me that he miss me so much,
So Amazing!! So that was how he came back that same day,with lots of love and joy,and he apologized for his mistake,
and for the pain he caused me . Then from that day,
Our relationship was now stronger than how it were before, All thanks to Dr Unity. he is so powerful and i decided
to share my story on the internet that Dr.Unity real and powerful spell caster who i will always pray to live long to help his children in the time of trouble,
if you are here and you need your Ex back or your husband moved to another woman, do not cry anymore, contact this powerful spell caster now.
Here’s his contact: Email him at: Unityspelltemple@gmail.com ,
you can also call him or add him on Whats-app: +2348071622464 ,
you can also visit hiswebsite: https://unityspelltempe.blogspot.com
0