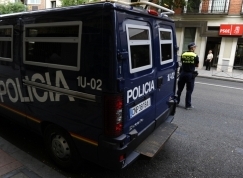 
Dogs have been out searching a property owned by their paternal grandfather.

The search continues for two children, aged 6 and 2, who were reported missing from a park in Córdoba on Saturday and, on Monday, the home of a relative of the children’s father was searched for any clues to their whereabouts.

It’s unclear what was found there, but reports indicate that the children’s father was taken to the property to try and clarify the evidence which was found. Police have questioned the father and other family members, including an uncle and one of the children’s grandmothers.

Dogs were out also out searching a finca which is owned by their paternal grandfather in the Córdoba district of Las Quemadillas on Monday. El País indicates that the search was led by a team of officers from Sevilla headed by Comisario Manuel Piedra Buena, who was in charge of the Marta del Castillo investigation.

Ruth and her younger brother José live with their mother in Huelva, but were in Córdoba to visit their father’s family last weekend following their parents’ recent separation. It was the father who reported that his children had gone missing on Saturday, after saying he had lost sight of them for a moment in the park.

His estranged wife reported him for psychological ill treatment on Sunday after she had been informed of her children’s disappearance.

Applying for an NIE number in Spain (5)