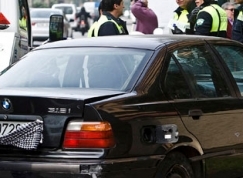 
A driver was arrested after a police chase driving through the pedestrian zone in Malaga.

A driver was arrested yesterday morning in Malaga after driving through the pedestrian street of Compositor Lehmberg Ruiz and Avenida de Andalusia in a remarkable police chase.

The man arrested was driving a black BMV 520 with the number plates concealed.  Police received a call around 10:50 hours warning of the presence of the driver in the pedestrian zone of Compositor Lehmberg Ruiz, however the man fled upon the arrival of the police patrol immediately prompting a chase.

After pursuing the 30 year old man and resident of Los Palomares for 10 minutes, the car ended up crashing into a parked car and a lamppost. The driver has been arrested for reckless driving and fleeing from authorities.  He did not have a license however the police found gloves and a knife in the vehicle and are now investigating whether he is connected with any other crime. The car was not stolen, as it was in the name of a relative.

Civil Guard and Police in an Incredible Chase