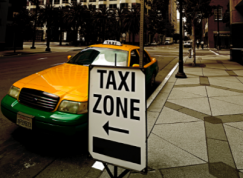 
Around 500 people attempting to leave Malaga Airport by road were trapped last Thursday night due to a protest organized by taxi drivers.

This came after a heated argument between a group of taxi drivers and pre-paid transfer drivers who were picking up passengers. The taxi drivers complained that they were not authorized to do so, and the police had to intervene when some came to blows.

According to the taxi drivers, although the other drivers may be in the employment of licensed companies, on some occasions, they pick up passengers without a prior contractual agreement. That night, they say there were three vehicles picking up people and they attempted to prevent this situation.

The taxi-divers claim this causes them to lose 65 per cent of the airport customers, which seriously affects the sector. The initial 100 taxis involved in the altercation were joined by another 200 from Malaga city who completely blocked access roads to and from the airport.

Francisco Soria, the President of the Taxi Union Cooperative, has demanded an urgent meeting with the Junta de Andalucia Councillor for Public Works and Transport, Josefina Cruz, to find a solution to the problem. The Councillor for Accessibility and Mobility, Raul Lopez, admits that the taxi drivers have a problem but claims it is not under the jurisdiction of the City Hall. “The Local Police do what they can” he said “but the body in charge is the Delegation of Public Works”.

Meanwhile, the taxi drivers complain they are facing another problem at the bus station, where immigrants are operating as taxi drivers in vehicles some of which have not passed their ITV and don’t have insurance. They complain that they have an aggressive attitude and that one of them threatened an official taxi driver with a sword.

These immigrants generally approach people of their own nationality, including Moroccans, Algerian and Sub-Saharans and offer to take them to their destination for much less than the official taxis. This, they say, has been going on for the past few months, and there are allegedly around 30 drivers who park in the area around the bus station.

Their services are normally accepted by the people they approach whose main interest is saving a few euros. Lopez said that the City Hall is aware of the problem and that Local Police will be more vigilant until it is stopped.