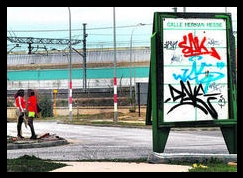 
The organization allegedly blackmailed the women with the payment of a debt of 50,000€. Ten people have been arrested in the Guadalhorce industrial estate.

A network dedicated to sexually exploiting and intimidating Nigerian women with voodoo has been busted in the Guadalhorce industrial estate in Malaga in an operation in which ten people were arrested, three of which have been sent to prison under court order.

The investigation began last August when the existence of an organization whose members were taking women from Nigeria, who had been convinced to move to Spain was discovered.  The women were told that they would be able to study and work, and were provided with false papers, according to the provincial police station in a statement last week.

According to police, once in Spain, the victims were taken to Lérida, where they were housed in an apartment controlled by the organization. A few days later, other members of the network moved them to a house in Malaga, where they were informed that they had incurred a debt of 50,000€ with the organization, and that they would have to settle the amount in prostituting themselves in the Guadalhorce industrial estate.  If the young girls refused, violence was used against them until the woman agreed to prostitute herself.The woman would then be monitored under "tight control" by one of her fellow countryman, who also allegedly used voodoo, which is firmly believed in within the Nigerian community, as a method of intimidation.

Among the ten people arrested nine were of Nigerian origin and one Spaniard.