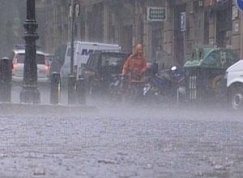 
Rainfall warnings have been issued again for the province of Malaga this winter.

The Traffic Department reported today that the early rains initially effected the capital and have caused tail backs of up to six kilometers entering the city. According to forecasts from AEMET, rainfall is estimated to be 80 liters per square meter in twelve hours.

The orange alert will remain active until 0.00 hours on Tuesday, and will revert to a yellow risk level as rainfall continues. Forecasts estimate that 15 liters per square meter will fall in one hour and 40 in twelve hours in the areas of Ronda, Costa del Sol and Guadalhorce.

It seems that the rains will remain in the province for most of the week and on Thursday they are expected to decrease their intensity, whilst maximum temperatures are expected to rise slightly.