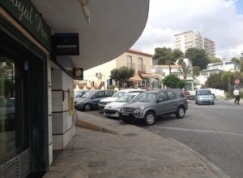 
There were two similar bank robberies within three hours in Marbella on Wednesday morning, netting the thieves at least €86,000 in total.

The first robbery occurred on Wednesday at 8.00am as staff opened the branch on Calle de los Jazminez. Entering the bank unmasked, a man pointed a gun at workers and forced them to open the safe. Witnesses report that an accomplice waited on a motorcycle at the door of the bank as cash was handed over, then fled with the gunman on the back.

Although an official figure has not yet been released, the robbers are believed to have stolen more than €80,000!

The second robbery took place at 10.30am at another bank nearby, with staff again being approached by an unmasked man with a firearm. Leaving with €6,500, the robber fled in a getaway car waiting outside the bank. The Policia Nacional are currently investigating whether the heists were carried out by the same individual.

Spain’s economy to grow by 1.2% this year, predicts central bank