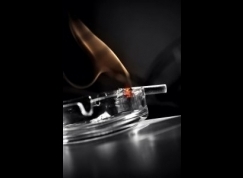 
Since Spain  introduced one of Europe's toughest smoking bans in January, smokers have been searching for places to continue their habit.

The fines for breaking the smoking ban range from 30 euros to 600,000 euros. Aside from playgrounds and access points to schools and hospitals, smoking is also prohibited in bars, restaurants, club, casinos and airports. Only the hotels are allowed to reserve 30% of their rooms for smokers. By 2012, all of the European Union's 27 member states should have banned smoking in enclosed zones.

That is why 40 friends in Ronda created their own "Smoking Club" called ‘Luis Hernandez’ . It has been approved by the Interior Ministry. The club is located in El Casino building in the centre. The club members can also watch television and play different games, while continuing their smoking habit for a fee of €5 per month.

Spain to take a harder line on smoking laws (1)