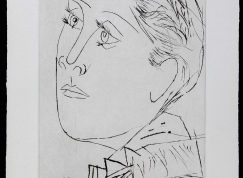 
The gallery aims to expand its collection throughout 2010

The Museo Picasso Málaga has launched  the ‘Fundación Museo Picasso Málaga. Legado Paul, Christine y Bernard Ruiz-Picasso’, with the aim of enlarging  of the Collection throughout 2010 via donation, acquisition and temporary gratuitous loans. This expansion has been made possible by the backing of  by Christine, Almine and Bernard Ruiz-Picasso as well as the support of the Museo Picasso Málaga by the Government of Andalusia’s Ministry of Culture, which has meant an increase in the painting gallery’s works by fifty percent, as the museum has increased its ownership of Pablo Picasso’s oeuvre from 155 to 233 works.

The Museo Picasso Málaga has acquired 22 drawings, 46 engravings and 4 illustrated books, which form a set of 72 artworks spanning several of Pablo Picasso’s periods and techniques.

As well as this, the Museo Picasso Málaga Collection has been increased by the personal donation by Almine and Bernard Ruiz-Picasso of 6 works: 2 drawings and 4 engravings by the Malaga born artist.
This growth will be complemented next October with the loan, through a fifteen-year agreement with the ‘Fundación Almine y Bernard Ruiz-Picasso para el Arte’ (FABA), of 43 works by Pablo Picasso, which would be impossible to acquire under market conditions.
The enlargement of the Permanent Collection means that from March this year visitors to the Museo Picasso Málaga will be able to view a selection of the new works.

The Museo Picasso Málaga is also working on a guide book that will offer a selection of Pablo Picasso’s most representative and significant works in this Collection, which will be on sale to visitors at the MPM Bookshop from spring. As well as this two new publications are being prepared, focussing on the 233 artworks in the Permanent Collection of the ‘Fundación Museo Picasso Málaga. Legado Paul, Christine y Bernard Ruiz-Picasso’

A Night With Picasso

Reorganisation of the Picasso Museum in Málaga

The Night of the Museums - Picasso Museum -Málaga

Picasso: Horses at the Picasso Museum-Málaga