Morocco claims half the tourist income from the Alhambra in Granada 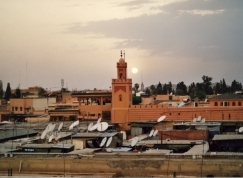 
The Moroccan Culture Minister said "it would build bridges between the two countries".

Morocco is claiming half the income from tourists who visit the Alhambra Palace in Granada. The Moroccan Culture Minister, Bensalem Himmich, has proposed that a mixed company be established between both countries to run the Granada monument, considering it would be justice for Boabdil.

Boabdil, the last Moorish King of Granada, who was expelled by the Catholic Kings, spent the last years of his life in North Africa, and according to the Minister, said he wanted to see a shared management of the Granada palace. ‘Boabdil’s descendents were Moroccan’, said the Culture Minister.

The Minister has made his demand to both the Spanish Government and the Junta de Andalucía, according to the internet site ‘Guin Guin Bali’ and the web ‘Nador City’, and considers the mixed company could manage both the visitors and conservation. He claimed that such an arrangement could ‘open bridges of cooperation and friendship between our two countries’.

Later on Wednesday however, the Moroccan Embassy denied that their Culture Minister had called for income from the Alhambra. 'After consulting with the Ministry, we have no data to verify these declarations'.

References to the story have disappeared from the two Moroccan sites. Last year there were more than three million visitors to the monument and Generalife gardens, making the Alhambra the most popular tourist attraction in Andalucía. Income was nearly half a million €.

"Secrets of the Chef" in Morocco