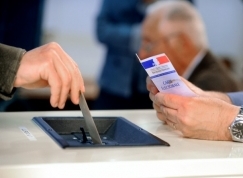 More than 35 million citizens are called to vote in Spain today in local and regional elections which many consider will be decisive for the future. The poll comes when the country has nearly five million out of work, with 45% youth unemployment, with banks still keeping the credit tap closed and with weak consumer demand.

As t housands demonstrates across the country following the lead of the ‘indignant’ in the Puerta del Sol in Madrid, part of the society is clearly unhappy with its political classes. There are many indicted candidates in both the PP and the PSOE parties standing today, with the single regional president, Francisco Camps for the PP, looking for, as he sees it, absolution by popular vote in Valencia.

In the Basque Country the controversy is found with the coalition Bildu being allowed to stand candidates in the local elections.

The Socialist Government is braced for a hammering from a country hit by both the world banking crisis and a burst real estate bubble at home. Minority parties hope to benefit from a general disillusionment of the main two parties.

The main battlefields are in Castilla-La Mancha and Extremadura where the Socialists facing losing control of what have been party heartlands. The most optimistic government forecasts say they will hold on to Aragón.

In Asturias we can expect a pact between the PP and the new party from Álvarez-Cascos, and on the Baleares the socialists will lose control as they have no other party prepared to support them. Barcelona is also expected to be lost by the Socialists with CiU favourite to take control. The PP will romp home with increased majorities in Madrid, Valencia, Murcia and Castilla y León.

824 deputies for regional governments will be elected today – The regional elections are being held in all communities with the exception of Andalucía, Cataluña, the Basque Country and Galicia. In the local poll 68,462 councillors will be chosen along with 8,116 mayors and 1,040 provincial deputies.

A large number of postal votes indicate a high turnout.