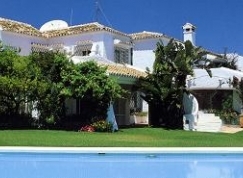 
Sir Sean Connery has been ordered to give evidence at a court in Spain in regard to an alleged money-laundering scam.

The actor, his wife, and members of a law firm based in Marbella, on the Costa del Sol, have been summoned to appear before the court in Marbella later this month.
The former James Bond star and his French artist wife, Micheline Roquebrune, have not been charged with any offence nor arrested.Sir Sean’s wife told The Times: “These allegations of money laundering are nonsense. We have nothing to do with this. We sold the property and that’s it.”
Under the codename Operation Goldfinger, police raided the offices of the Díaz-Bastien & Truán law firm in Marbella and Madrid on Wednesday and removed 30,000 documents. No arrests were made. The case centres on the star’s former mansion Casa Malibu, according to sources cited by El Mundo newspaper yesterday.
Investigators are looking at alleged irregularities in the reclassification of the land on which the mansion stood after its sale by the film star in the 1990s.
Sir Sean, 79, who bought Casa Malibu in Puerto Banus, one of the most expensive areas of the Costa del Sol, in the early 1970s. He put the villa on the market in 1998 for $9 million after tiring of the overdevelopment in the area. Betweeen 2004-05, a four-storey block of 70 apartments was built on the land. The flats are now on sale for between €1.4 million (£1.2 million) and €2.2 million. When the land was later reclassified for flats, alleged irregularities are said to have taken place. There is no suggestion that Sir Sean or his wife were involved in any wrongdoing. Lawyers working for Díaz-Bastien & Truán are said to have negotiated the reclassification of the land with the late Jesús Gil, the former Mayor of Marbella, and Juan Antonio Roca, the former head of urban planning in the resort.
Mr Roca, 53, is alleged to be at the centre of a Mafia-like alliance between local politicians and developers in Marbella in which illegal building licences were exchanged for kickbacks running into tens of millions of euros. Mr Roca, who denies charges including fraud, corruption and misuse of public funds, is due to face trial this summer. About 100 people, including a former mayor of Marbella, councillors, developers and lawyers have been arrested in connection with the investigation.
The Times telephoned and e-mailed Sir Sean’s agent in Los Angeles yesterday but was unable to get a response.

You seem to have lifted this from The Times...
0