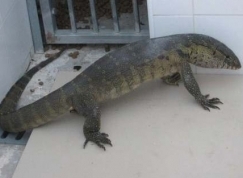 
Local Police think the animal may be an escaped pet.

A carnivorous lizard Lagarto Carnívoro which measures 1.2 metres long has been captured by the Local Police in Málaga, while it was walking through the gardens of an urbanisation in the city in the Arroyo Toquero area.

It was the urbanisation gardener who called the police who think that someone may have had the animal as a pet, and that it had been abandoned or escaped.

The lizard has a muscular body, strong legs, powerful jaws, claws, sharp teeth and a forked tongue. It will devour any animal it can get inside its mouth.