Which urbanisations have been burnt or affected by the fire? 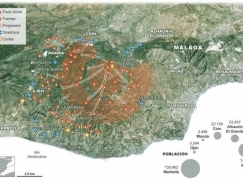 The fire broke out on Thursday afternoon and has affected Coín where some 60 homes have had to be evacuated. The extinction of the blaze is being complicated by the strong hot wind known locally as the ‘Terral’. Some 5,000 people have been evacuated, including 90% of Ojén, and ten urbanisations in Marbella. The AP-7 was closed for a time.

Numerous homes have been burnt out and others seriously affected in Ojén and Marbella. The urbanisation La Mairena has flames affecting several properties including José Iglesias villa. Those who escaped from Ojén did so with just the clothes they were wearing. The situation is particularly difficult in the upper part of Calahonda where residents have been evacuated and there are flames in the urbanisation between Calle Cristóbal Colón and the residential complex Princess Park. Some 3,000 residents of El Rosario in Marbella have been evacuated. People have been sleeping in sports centre in Monda and Marbella and municipal buses have been laid on as transport.

Three of the four fronts were brought under control just after midnight. The fire is also affecting Alhaurín El Grande and Mijas where homes have been evacuated in the Entrerrios area, according to the Junta de Andalucía. The Barranco Blanco urbanisation in Coín is close to the fire, and there were fears that non-forestry zones could be affected.

The Hotel La Cala Resort has also been evacuated of its 200 guests. Those evacuated have been told to go to the sports centre in La Cala, the sports centre in Las Lagunas or the Mijas Hippodrome. 13 airborne fire fighting planes were brought in on Thursday afternoon from Málaga, Córdoba and Granada, and they resumed their work at first light this morning.