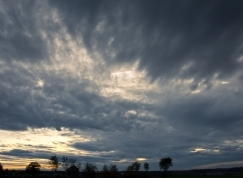 
Figures issued by the Meteorological Office (AEMET) at the end of March show that it was the wettest March since records began in 1947, with an average of more than 150 litres per square metre registered across the country.

This represents 50 per cent more rainfall than usual in the Ebro Valley, the Basque Country, nearly all of Andalucia, Castilla-La Mancha and Badajoz. The Ebro River has flooded its banks in many areas in the north of the country, especially in Navarre, while the Duero is keeping the region of Castilla-Leon on orange alert. And while the rains have eased off slightly, the higher temperatures will bring more water down from the mountains all over Spain in coming days, especially in the northern areas lying at the foot of the Pyrenees.

An AEMET spokesman said on Tuesday that it began to rain in mid-January and since then there has been more rain than normal. He said that since the beginning of the so-called hydrological year (October 1st 2012 to September 30th, 2013) 531 litres per square metre have fallen in many areas across Spain, which is 38 per cent above normal. As a result, reservoirs across the country have reached record levels of more than 90 per cent of their full capacity, banishing the threat of drought for at least the next two years.

In Andalucia, some 20 reservoirs in the provinces of Jaen, Cordoba and Sevilla are 100 per cent full, while the Guadalquivir River continues to overflow its banks, flooding the low-lying areas of towns in Cordoba and Jaen provinces. Residents of higher levels have been warned that if the river continues to rise, they should prepare themselves for evacuation.

The weather forecasts indicate an easing off of the rains in most parts of Andalucia but not in the northern half of the country, where the situation will remain critical for the next week at least.