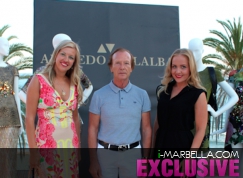 Since the creation of the first online luxury TV channel world in 2005, Theresa Bernabe TV has been a synonym to exclusivity and prestige, constantly seeking innovation. Since the founding, www.TheresaBernabe.TV has continued to incorporate international millionaires spectators (over 149 countries visit the channel), the kind of people who do not think twice about the cost of renting private jets, buying the latest vehicle before presented to the market or buy their second or third home, who are able to afford to stay at the forefront of all developments that exist in our industry. In 2007 the luxury channel also began its journey abroad with international airlines offering passengers the finest entertainment never seen before, continuing prestigious partnerships with major media and financial portals, conducting interviews only with the famous and with the most influential people in the world, introducing international conferences and much more.

Products & Services on the 9th Anniversary of Theresa Bernabe TV:

GLENFIDDICH 50 YEARS – THE MOST EXPENSIVE BOTTLE.

DELAFÉE – THE MOST EXPENSIVE TATOOS IN THE WORLD – 24K GOLD

CAVIAR DE RIOFRIO – THE FIRST AND ONLY ECOLOGIC CAVIAR IN THE WORLD.

LUXURY COLLECTION BY COVAP – FIRST PRESENTATION IN THE WORLD OF THE LIMITED EDITION OF THE FINEST HAM WITH CRYSTALS.

CANNES FESTIVAL ARRIVES TO MARBELLA PRESENTING FOR THE FIST TIME A COLLECTION OF CHANEL, GIVENCHY,… DRESSED WORE IN THE FESTIVAL IN THE YEARS 50 & 60.

AHUMADOS DOMINGUEZ – THE SALMON OF THE JET