The Vuelta Ciclista a España 2015 in Marbella: Exciting Gallery 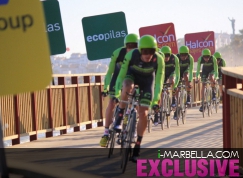 
The Vuelta a España (English: Tour of Spain) is an annual multiple stage bicycle race primarily held in Spain, while also occasionally making passes through nearby countries.

Inspired by the success of the Giro d'Italia and the Tour de France, the race was first organised in 1935.

Along with the Tour de France and Giro d'Italia, the Vuelta makes up cycling's prestigious, three week-long Grand Tours. While the route changes each year, the format of the race stays the same with the appearance of at least two time trials, the passage through the mountain chain of the Pyrenees, and the finish in the Spanish capital Madrid. The modern editions of the Vuelta a España consist of 21 day-long segments, stages, over a 23-day period that includes 2 rest days.