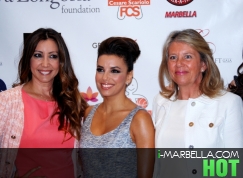 
The charity events of the year: The Dynamic Walk-a-Thon and the Global Gift Gala start this weekend in Marbella.

This weekend Marbella holds the year’s most important date for solidarity. The actress and philanthropist Eva Longoria will realise her project of a “Philanthropic Weekend”. It’s an initiative that has been carried out thanks to the efforts of the organisers MandA Events -Dynamic Walk-a-Thon and Global Gift Gala- and Dynamic Marbella –Dynamic Walk-a-Thon-, who have had the support and collaboration of many sponsoring firms.


The Dynamic Walk-a-Thon will take place on Saturday the 18th of August from 8:30am to 1pm, during this time there will be live performances by Vanessa Martin, La Negra Mayte and Sabrina Romero. There will also be a mini amusement park for the younger children at Le Village Shopping centre.

The walk begins at 9am which will include the participation of well- known faces such as that of Eva Longoria, Sergio Scariolo and Julio Baptista. And we mustn’t forget Fernando Romay’s role as the as master of ceremonies. At 10:30pm, Aqwa Mist, in Puerto Banus, will hold an exclusive party for those specially invited from the Philanthropic Weekend to a welcome cocktail.


On Sunday the 19th of August at 8pm at the Meliá Don Pepe Hotel, the actress Eva Longoria will celebrate the Global Gifta Gala, the charity dinner held for the Cesare Scariolo Foundation, the Eva Longoria Foundation, and the Malaga Club de Fútbol Foundation.

The Global Gift Gala, is a gala dinner, with spectaculars and surprises, which a menu which has been designed my two chefts from Marbella, Dani García (Calima) and Diego del Rio (El Lago), holders of two and one Michelin stars, respectively.

The evening will be presented by actress and presenter Mar Saura and the American Actor Amaury Nolasco (Prison Break) and will be livened up by the likes of Pastora Soler, Chenoa and Diana Navarro. The actor Terrence Howard has also guaranteed a spectacular show, which should wow the audience with an exclusive performance which will be accompanied by musician Diego Amador.


This year Eva Longoria with MandA Events and Dynamic Marbella, are hoping that the big charity event, created by the actress and Philanthropist, will once again raise as much as they can for the three NGO’s. The three non-governmental institutions work to help children with medical problems-mainly those with cancer- and their families socially, mentally and economically.

For further information regarding the event please visit:
www.dwmarbella.com and www.theglobalgiftgala.com

About The Eva Longoria Foundation
The foundation was established in 2010 by actress, activist and philanthropist Eva Longoria. This foundation has been established primarily for, but not limited to, two charitable causes: women in the Latino community and children. http://www.evalongoriafoundation.org/

Mission:
To help women build better with career training, mentorship, capital and opportunity. By investing in women and girls, we hope to build a stronger future for our world. Furthermore, The Eva Longoria Foundation will help raise awareness for children of all ethnic and racial backgrounds suffering from health-related problems. Eva Longoria has been a spokesperson for Padres Contra El Cancer for the past nine years trying to improve the quality of life for children with cancer futures for themselves and their families through education and entrepreneurship.

Overview:
Women play an important role in society, yet they disproportionately lack educational and economic opportunities.
· Women account for two-thirds of the world’s illiterate adults
· In developing countries, only 63% of girls enroll in secondary school
· Women make up only one-third of non-farm wage earners
In spite of these discouraging statistics, we are optimistic about the future for women and girls, especially Latinas. Hardworking and dedicated to their families, they are one of the world’s greatest untapped resources.


Our vision is to give women and girls the tools they need to reach their potential. The Eva Longoria Foundation supports programs that help girls excel in school and attend college. Additionally, we work to provide female entrepreneurs and their families. Eva Longoria has also founded Eva’s Heroes in San Antonio, Texas, in an effort to enrich the lives of teens and young adults who are developmentally challenged.

About the Cesare Scariolo Foundation
It is a private non-profit organization whose main goal is direct aid to children who are receiving cancer treatments, as well as social and psychological support to their families. Born by the impulse of its president, Sergio Scariolo basketball coach, and develop its task mainly in the province of Malaga, although in order to continue growing in the rest of the country http://www.cesarescariolo.org/

“It has always been part of my concerns and thoughts awareness of the existence of people and especially children and their families who have to learn to live with serious illnesses such as leukemia and lymphoma. Accordingly, those who have requested my assistance, are entities or institutions have been able to count on it. The personal experience as a result of the cancer disease suffered by my father and his subsequent death, make those concerns and thoughts to surface in a more latent and involve me more with the idea of helping those who are so severely affected for such diseases. This is the meaning of Cesare Scariolo Foundation, an idea born with lots of help modesty, wanting to be a grain of sand over the many individuals and institutions that devote their efforts to combat diseases.” – Sergio Scariolo.