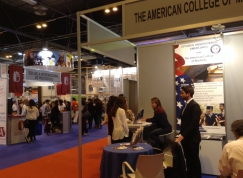 AULA 2014 had 217 participating organizations from 38 countries and has hosted a wide range of universities, a comprehensive call for the world of education and a clear function of advice for young people seeking guidance towards their professional future where university degrees and study-abroad programs had special prominence. ACM Campus Director Melissa Butler, stressed that “the academic model offered by ACM was very well received by schools and families as it allows students to study the first two years in Spain and the last two years in a university in North America, where they will obtain their university degree.”

In addition to the exhibition, EDUCATION WEEK program included a series of conferences organized around the different areas of interest. ACM gave two talks, "Advantages of the American University System" and "How to Perform under Stress", where note-speakers analyzed the process for obtaining athletic and academic scholarships, and the techniques used by elite athletes to give the best of themselves in difficult situations, respectively.

Economic impact on the city of Marbella

For its part, the City of Marbella has actively supported the implementation of the first college in the city. Delegate of Tourism Jose Luis Hernandez says “the university to be strategic for the city as it represents a strong long-term investment that encourages diversification of the local economy." Hernandez stressed the importance of attracting foreign students that will represent a non-seasonal income flow.