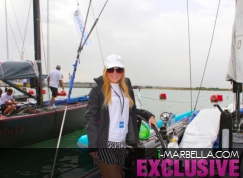 
So I had the most exciting invitation from by good friend Kaouthar Wadih (from Simply K events), to be the guest in the RC44 Championship Tour in Trapani, Sicily. Imagine driving car designed by Formula One legend Michael Schumacher. The RC44 is sailing’s equivalent, the boats are designed by four times America’s Cup winner, Russell Coutts. The boat was conceived in 2007 and now attracts some of the world’s leading business minds as their owner/drivers along with the top sailors in the world. The Tour pits people who know what it takes to succeed against one another over five events at exceptional sailing venues around the world.

Launched in 2007, the RC44 Championship Tour fast established itself as one of the most competitive and respected events on the international yacht racing circuit. Having travelled over 4000 nm across the Gulf of Oman, Gulf of Aden, the Red Sea, through the Suez Canal and into the Mediterranean, the 13 strong fleet of RC44 next destination was Trapani(Sicily) for round two of the 2013 RC44 Championship Tour. I was honored to be the guest on Brian Benjamin's Team Aegir Racing(GBR).

Brian also races his other yacht, Carbon Ocean 82, Aegir II Racing Yacht. Those familiar with nautical creations will know that the Aegir II is actually a replacement for the Maxi Dolphin Aegir which won at the 2010 Giraglia Rolex Cup. The Aegir II however, is a build of an entirely different type. First, it is built from pre-preg carbon, which utilizes aerospace technology to provide an upwind speed of 10.5 knots. Every square inch of this boat is built from a new piece of technology and prepared to hit the open water in style! It should be noted that the utmost effort has been put into ensuring that this yacht is ready for racing the moment it hits the water, which means a number of different maneuvers will need to be achieved with the bare minimum of effort.

The interior is well lit, and of contemporary design. The owner can occupy the entire yacht and maintain their privacy. Two additional cabins can be created in the event this yacht is used for passenger transport or even recreation at some point in time. Naturally, the main intent is racing, but there isn’t always a race on, and the designer certainly understand this. And this is the yacht we stayed on during the Trapani Cup, and it is really an amazing boat. You feel more like you're staying in a hotel on the water! Yacht enthusiasts will of course be glad to know that this boat will not be available exclusively to Brian Benjamin! He does own the original model of course, but the design will be available in a semi-custom format later on so that clients can order a design and customize it to their liking. This will undoubtedly create a brand new era in the world of yacht racing around the globe.

Read more about Carbon Ocean Yachts on their website www.carbonoceanyachts.com

The race took place from the 1-5th of May and it was really an intense week full of sailing and adrenaline. I have always thought that billionaires play golf or maybe own or rent a boat, but to sail one? I had no idea that it was even in their agendas. And this sailing race takes place in five different countries throughout the year. Imagine that. Sending your boat in a container around the world to race for fun. Because this race is not a money-making project, you have to spend to stay in the game. Pay the yacht expenses, travel costs, 8-member team (that often includes world champions, but always three amateurs, that is the condition of the race). And of course all the owners are amateurs, but they are in charge of steering their beauties. But it is definitely worth the money, because the thrill you get when you're on that boat during the race, is priceless. Even better when you win the cup!

So I headed to Sicily. What a beautiful island! Trapani is a city and comune on the west coast of Sicily with beautiful architecture and friendly locals. And if you visit Sicily, make sure you go to Marsala, which is famous for the landing of Garibaldi on 11 May 1860 and also for its Marsala wine. On the second day of my stay, the organizer of the Trapani Cup (who was also the owner of Team Italia)  Massimo Barranco organized a dinner and wine tour in Marsala for the boat owners. Unfortunately I didn't get to try any of the famous wine or their exquisite food, since i caught a stomach virus and had zero appetite in the dinner table. And as it later turned out many other people had the same problem, so at least I knew it wasn't a food poisoning and I can assure you the food in Sicily is fantastic! So was our chef and the team of Brian's yacht where we stayed.

The days in Sicily were mainly spent on water. With the beautiful yacht we went every day and enjoyed the race up close. And I also got to be on Aegir's boat during the match race. I had seen the photos and videos before and Kaouthar had a small accident in Oman, so I was cautious to say the least. But I had come to Trapani to be a part of the race and experience it, so there was no way that I could've said no that one-of-a-kind invitation. And to be honest, I ended up enjoying it, more than I though I would. But one race was enough for me, it still is an adrenaline shot if you're not used to doing this daily. But the team knows exactly what they're doing. The tactician on Aegir's boat was Ian Williams. Brian Benjamin's Team Aegir comes from the world of Maxi Yacht Racing and they joined the RC44 Tour in 2012 competing in two of the season’s five events. Whiles others have been competing in the race for years.

Have a look at the teams:

Overall, I would say that being part of the race and seeing it so close made me understand why these men have chosen to engage in this expensive but spectacular hobby. Now with two events completed in the 2013 RC44 Championship Tour, Team Aqua takes over the overall lead from Katusha, with Artemis Racing third and Team CEEREF fourth. If you are interested in seeing the next cup, then book your tickets to Sweden today, because that's where the Tour is now heading. The RC44 Sweden Cup in Marstrand takes place from 25 – 29 June 2013.

Tene Sommer's Blog Vol.4: What to do when it rains in Marbella (6)