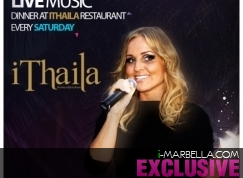 
As far as I can remember, singing has always been a part of me and there is something about singing that is so very different about my other hobbies and passions. For me singing is not only a way to express myself, at the same time I can also entertain others!

I began singing in a church when I was only couple of years old. Then before going to school at the age of five, my mother put me and my sister in singing classes. So I have to thank my mother for letting me fall in love with singing at a very early age! Of course during school years I was still actively singing and even sang in a girl band. When I was about 9-years-old I also went to Parnu Music School, where I studied violin and also piano for four years. All that gave me a full understanding of music and its history in another aspect.

After music school I decided to concentrate in dancing, so I learned different styles of dancing. For me that was another way of engaging music in my life. So all my life I have been either singing or dancing, I've never let music out of my life. And only two years ago I took an intensive vocal coaching course in the best music school in Tallinn, Estonia, which helped me use my voice a lot.

How did I start singing in Marbella? Well in 2010, me and my sister were asked to perform at i-Marbella 1st Anniversary in Suite del Mar, Magna and in Puro Beach. Since we started a project in Estonia together called Sommer in the City singing famous covers. And ever since I stayed in Marbella I had to sing on my own. Not many people know I sing, since I everybody know me only from i-Marbella. But slowly the word has spread and I started two years ago singing in charity events, Salamanca's Ferrari presentation at Finca, also at La Sala, Suite del mar, Guey and other places. This summer I had the honor to sing in Saeko Hamada's wedding at Marbella Club and now since in winter I had more time to focus on singing solo again.

I get asked a lot what kind of songs do I sing.. Well I sing songs that I know people like. Hits from Stevie Wonder, Sting and Tina Turner to Cece Peniston, Beyonce, Emeli Sande and James Morrisson. My personal heros are Mariah Carey, Beyonce, Michael Jackson, Jennifer Lopez and Whitney Houston. I started listening to Mariah Carey when I was very young and fell in love with all of her songs and I knew all of her lyrics by heart! I admire women with great voices and big careers! And especially if they are great role models and inspire you to succeed in whatever you do, like Beyonce.

So, I have my own residency now at the beautiful iThaila restaurant, that is located on Avenida de La Fontanilla in Marbella, and you can come and listen to me every Saturday night.

Also, this Valentine's Day, on the 14th of February, I'm singing at La Fontina restaurant in Nueva Andalucia, which has a very romantic atmosphere, so if you don't have Valentine's Dinner plans yet, hope to see you there! Also I had the honor of singing for the Costa Women Positively Pink party at Guey this Tuesday, so many lovely ladies in pink gathered for a great cause, very proud to have been a part of it!