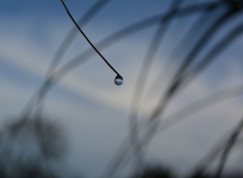 Cold, wind, ice, and rain are forecast for the upcoming long weekend, according to Spain's national meteorological agency.

Frosty conditions are predicted for the interior of the country, with the northern half of Spain expecting heavy rainfall.

The national weather agency Aemet are forecasting strong winds and rain along the northern Cantabrian coast, extending to the Pyrenees, reaching a peak in the exposed valleys of the north.

The weather agency is also expecting more infrequent showers across Catalonia and in Majorca and Menorca.

The rest of the country can expect clear skies with cloudy intervals, especially in mountainous areas, where the snow line will be from 800 and 1,000 metres in the north of Spain and as low as 500 metres in the Pyrenees.

In the Canary Islands cloudy intervals are forecast with the possibility of light showers in the north of the islands, with rain showers moving across all of the islands by Monday December 8.

The December long weekend is made up of two national holidays: Constitution Day, on December 6, and the Catholic Feast of the Immaculate Conception, on December 8.

Heavy Rain, Storms, and Wind: Welcome to Spain in May