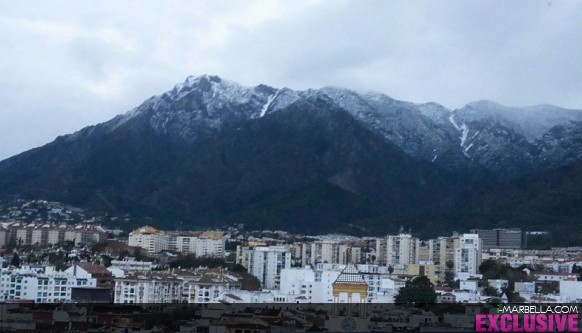 
The cold weather and snow surprise everyone in Costa del Sol

The first day of the cold wave that is affecting all of Spain was on Wednesday a sharp decline in temperatures in Marbella, with six degrees less in the maximum and up to eight in the minimum. The thermometers have dropped to 3.7 degrees during this day, while the snow has come very close, to Juanar, Ojén and the peak of the Concha.

Very cold day that Marbella had on Wednesday with very unusual temperatures and, above all, have been a great contrast to the previous day when the maximum had been 20 degrees.

This time the highest value only reached 14.6 degrees, one of the highest temperatures recorded in Andalusia, although it must be taken into account that it was measured at dawn, shortly after 00:00 hours.

With the arrival of polar air on the Peninsula, the thermometers have been lowering as the day progressed, contrary to what is usual. By midmorning, the temperature has been around 10 degrees.

Then it has continued to fall and the minimum, according to the Puerto Banus meteorological observatory, was 3.7 degrees, measured at 21:54 hours, eight degrees lower than the previous day.

The collapse of mercury has therefore been very important from day to day, and the presence of wind has made the heat sensation even lower.

In addition, the snow has approached the municipality quite a bit, appearing in Juanar, Ojén, generally in Sierra Blanca and overlooking Marbella in the peak of the Concha, which has dawned white.

By social networks is circulating an image with snow in the beach of the Cable that is not real, it is a mount that many people are taking for real, although it is not.

Down below it rained, collecting up to 7 liters per square meter, according to the State Meteorological Agency (AEMET).

It was the first day of the cold wave that is affecting all of Spain and in Marbella has left one of the lowest temperatures in recent years with that record around 4 degrees.

Over the next few days the forecast is for the situation to continue with similar values.