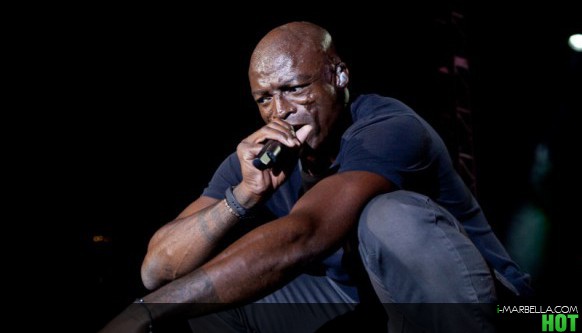 
The one and only Seal returned to Marbella, giving an amazing live concert at the Puente Romano Tennis Club.

He was last in town in 2010, when he appeared at the Puerto Banús bullring to a capacity crowd.

This year, Seal is celebrating 25 years in the music business with his ninth album 7!

“The album concerns the most sung about, most talked about, and most documented emotion... love”, says Seal.

Seal was first heard on Adamski's 1991 club smash Killer, and soon followed that with his own TOP-10 hit Crazy, and then Kiss From a Rose, memorably included in the Batman Forever soundtrack.

At the concert, Paul Maxwel The Piano Man warmed the audience up.

Coming out for the encoure at the concert, the singer announced that Novak Djokovic himself was in the audience and dedicated the famous Kiss By a Rose to the world's No. 1 tennis player.

Guests enjoy exclusive access to the Marbella Club Golf Resort, the Dave Thomas-designed championship course, and El Higueral, one of the most scenic courses on the coast.