Princes of Rurikovich Invited for Universal Lecture of Quijote 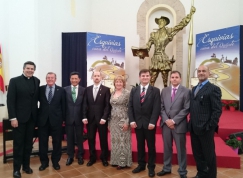 The Grand Prince and Grand Duke Jorge Rurikovich and The Grand Duchess Maryia Vladimirovna were invited at The International Lecture of Don Quijote in Esquivias, Toledo (Spain).

The International event took place at The City Hall of Esquivias and was officiated by The Major of Esquivias Elena Fernandez de Velasco and The President of Castilla La Mancha Maria Dolores de Cospedal as well as was featured by Governments and Ambassadors of 25 different countries.

The event took place in Esquivias for the 8th consecutive year, as the place where Don Quijote married Catalina Salazar y Palacios, also, the right day to start the inauguration of The International Day of The Book 2015.