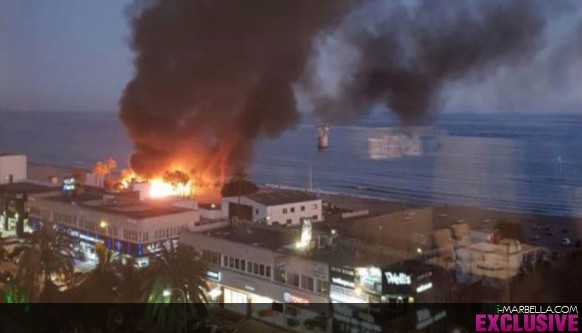 A fire ends with the beach bar in Marbella 'Playa Padre'. Source: i-marbella.com


One of the most exclusive beach bars in Marbella Playa Padre that was inaugurated in 2017 by Maria Bravo and Eva Longoria on the beach of El Cable has been completely burned down on Monday around 7 pm. The caused is still unknown to the media.

Playa Padre beach bar burns down by a massive Blaze in Marbella.

Breaking news in Marbella and Costa del Sol. María Bravo's beach club located in the area of El Cable beach in Marbella, Spain burned down after a fire broke out on Monday evening according to the local news. The beach club was being run by Albert Beniflah Lallouz and co-founder together with Maria Bravo.

Playa Padre, one of the most famous and exclusive beach establishments in Marbella and run by the actress and businesswoman Maria Bravo, suffered on Monday afternoon a fire that reduced it to ashes.

The fire in the bar located on the beach of El Cable was declared around 19:00 hours

Local people of the area in which the beach bar is located got terribly surprised when they've realized what was happening and immediately alerted the Emergency Service 112. A couple of minutes later officers and agents of the Local and National Police and at least four fire trucks arrived in the emergency spot where the incident occurred.

The firefighters managed to suffocate the flames and take control over 20:30 hours and the police officers closed the establishment that was mainly built in wood. The police started an ongoing investigation to find out the causes that may have set Playa Padre on fire.

The causes of the fire are still unknown, although it could have been intentional. At the moment, the police do not want to rule out any hypothesis. Furthermore, there is a need to wait for the investigations to be carried out.

The beach club is at this time of the year is closed. "The establishment had 60 people on payroll and we were ready to open in Easter. With this, I feel restless, worried and dismayed by what happened," said Maria Bravo's sister, Carmen Bravo, who, along with Maria, run the local. Both went to the scene after finding out that the bar, whose popularity contributed to the actress Eva Longoria, was burning.

Playa Padre opened in the summer of 2017 with actress Pamela Anderson as godmother. The Canadian actress Katheryn Winnick, one of the protagonists of the Vikings series, was the guest at the opening of summer 2018.

Maria Bravo owner of Playa Padre posted a video on Instagram letting all people know they were OK. ''Thank God we haven’t had any personal injuries. Only materials. Thank you all for your messages of affection ''.

With the goal of becoming one of the most exclusive beach bars in Marbella's summer season. Playa Padre opened last summer with a car parking service for customers, a massage booth and a celebration of summer parties on Wednesdays and Fridays with performances by the most influential DJs in town.

Part of its profits went to the Global Gift Charity House, also promoted by Maria Bravo.