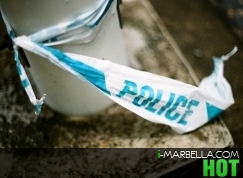 
The victim, 36, was taken to Carlos Haya hospital in Malaga for surgery.

Today in the early hours the security guard of Opera Room got seriously injured by gunfire and was taken to the the Carlos Haya Hospital in Malaga. The victim had several gunshots in the chest and after the operation he went to the Intensive Care Unit (ICU), and is still in a critical condition, according to a spokesman of the hospital.

The accident occurred about 6:15 pm in the Boulevard Alfonso de Hohenlohe, outside Opera Room. Apparently, this happened because of a dispute between four Moroccan men and the security guards, who didn't let them in the nightclub.

The National Police have taken over the investigation to determine the exact circumstances of what happened.

Jose 27-11-2012 14:56 Yes, it was Saturday morning, because after 00 we consider it to be the next day. But it happened on Friday not Saturday. Saturday everybody was already talking about this..
0

Marbella Citizen 26-11-2012 17:10 Sad story, but I'm glad that people write about it. We have to know what is going on in our city and work hard to prevent these things from happening.
0

Official Unveiling Of THE OPERA ROOM