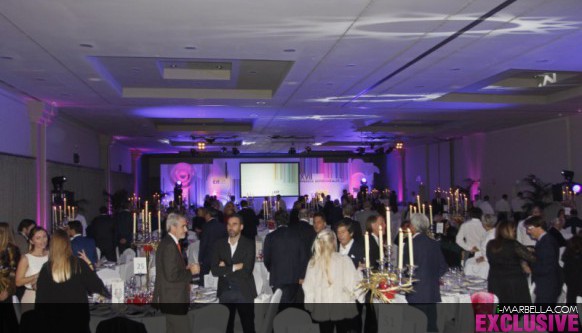 
The XVIII Business Awards of the Association of Entrepreneurs and Professionals, CIT Marbella Took place on November 24 of 2017 at Puente Romano Beach Resort & Spa celebrating the cohesion and strength of the businesses of the city of Marbella, Spain with an assistance of more than 350 guests

The winners of the XVIII CIT Marbella 2017 Business Awards, recognized for their impeccable work during this year were announced and praised.

This year honoured was D. Fausto Martínez, of FM Consulting and the Multiple Sclerosis Association Marbella-San Pedro and the "Luis Cierco Special Prize for the Marbella Tourist Promotion" has been given to The Global Gift Gala Foundation recognizing among other things their amazing job bringing new beneficial events through the year.

This meeting, which is considered the most important of the year among businessmen, was attended by important public authorities of the city such as the Mayor of Marbella, Ángeles Muñoz and a good part of her Government team.

Other important authorities of the region such as José Luis Ruiz Espejo, Monsalud Bautista, Susana Ibáñez, Francisca Caracuel, Margarita del Cid, Antonio Carrillo, Jerónimo Pérez Casero, Luis Callejón, Cristóbal Fernández Páez, Manuel Cardeña, and other representatives of the State Security Corps and Forces and members of the Municipal Corporation, made a presence and supported this important event in the aid of the city’s development.

This way, the night went out perfectly as the guests enjoyed a magnificent meeting by the hands of Puente Romano’s best chefs and staff but let the pictures speak for us.

About CIT Marbella
The Association of Entrepreneurs and Professionals CIT Marbella was born in 1989 on the initiative to foster Marbella’s main industry: tourism. CIT Marbella presents suggestions of interest for the improvement of tourism planning to official bodies such as the City Council, the Tourist Board of the Costa del Sol or the de Andalucía Board, among others.

As work of promotion of the city, they created, together with the City of Marbella, the Boulevard of Fame of Puerto Banus and Media Awards.

Annually the Association presents the Business Awards in recognition of the business work of the year and the contribution to the development of Marbella.

Global Gift Foundation is a non-profit charity whose goal is to create positive changes in development, wellness, health care and social inclusion of the most vulnerable. The Foundation helps provide shelter, food, clothing, education, medical care and other vital needs of vulnerable groups, particularly children and women in need.

Created in 2013 by entrepreneur and philanthropist Maria Bravo, the foundation supports projects from different organizations around the world and has recently launched its own, Global Gift House, a multifunctional center for children with rare or chronic diseases that is located in the city of Marbella and that will shelter at least 6 non-profit charitable organizations of the zone; Adisol (Association of Diabetics of the Costa del Sol), ADAHIMAR (Social Association of Attention Deficit Disorders and Hyperactivity), CADI (Center for Childhood Diversity Care), Association against Cystic Fibrosis, Bubble and Dreams Without diagnosis) and AMPEMNA (Association of Multiple Sclerosis Marbella / San Pedro / Estepona).

i-Marbella is moving to the video format and here we have our new video news!

I am Shannon by name. Greetings to every one that is reading this testimony. I have been rejected by my husband after three(3) years of marriage just because another woman had a spell on him and he left me and the kid to suffer. one day when i was reading through the web, i saw a post on how this spell caster on this address Makospelltemple@yahoo.com , have help a woman to get back her husband and i gave him a reply to his address and he told me that a woman had a spell on my husband and he told me that he will help me and after 2 days that i will have my husband back. i believed him and today i am glad to let you all know that this spell caster have the power to bring lovers back. because i am now happy with my husband. Thanks for Dr.Mako. His email: Makospelltemple@yahoo.com OR.His WhatsApp Number:+2347054263874.
0