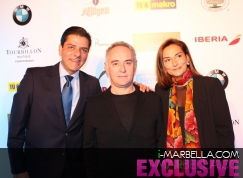 
The world's unique event is currently taking place at Puente Romano Beach Resort. 12 Michelin-starred chefs have gathered in Marbella to indulge the guests in their passion for the best cuisine imaginable.

Ferran Adrià i Acosta (born Fernando Adriá Acosta) is a Spanish chef born on May 14, 1962, in L'Hospitalet de Llobregat (Barcelona, Spain). He was the head chef of the elBulli restaurant in Roses on the Costa Brava and is considered one of the best chefs in the world.

Grant Achatz (born April 25, 1974) is an American chef and restaurateur often identified as one of the leaders in molecular gastronomy or progressive cuisine. His Chicago restaurant Alinea has won numerous accolades, and Achatz himself has won numerous awards from prominent culinary institutions and publications including the Rising Star Chef of the Year Award for 2003, Best Chef in the United States for 2008, and a 2012 Who's Who Inductee from the James Beard Foundation.

Quique Dacosta is the chef of an eponymous Spanish restaurant in Dénia, Province of Alicante, Spain. Following the closure of elBulli, Dacosta is one of the new leaders of avant-garde cuisine in Spain.

He only uses locally-sourced ingredients from within 75 km of his restaurant.

Joan Roca i Fontané (1964, Girona, Catalonia, Spain) is a chef of the restaurant El Celler de Can Roca. He studied in Escola d'Hosteleria de Girona, where later he became a teacher. He worked with his grandparents and parents in their famliy business, a restaurant of traditional catalan cuisine. Today, Joan is the chef of his own restaurant, together with his two brothers. Josep (sommelier), and Jordi (pastry chef). He is elaborating traditional cuisine together with avant-garde techniques, which implies research of both modern techniques and traditional recipes. Some of the techniques he uses are Sous-vide, "Perfume-cooking", and Distillation.

Juan Mari Arzak Arratibel (born July 31, 1942, is a Spanish chef, the owner and chef for Arzak restaurant. He is considered to be one of the great masters of the New Basque cuisine. He describes his cooking as "signature cuisine, Basque cuisine that's evolutionary, investigatory, and avant-garde."

He is a renowned innovator. After three years at Taberna del Alabardero in Sevilla, Spain, the knowledge-hungry chef moved on to the Spanish Pyrenees and its regional star Casa Irene, and later to his homeland, the province of Cádiz, where he continued his professional development at Restaurante El Faro.

The Adrià name is known far and wide in the culinary world. Ferran Adrià gained fame as the hyper-modern brains behind the now legendary Spanish restaurant elBulli, while his younger brother, Albert Adrià, earned his stripes in the culinary world as the behind-the-scenes pastry genius.

Andoni Luis Adurizis undoubtedly one of the most influential chefs of our times. Throughout his career, he has prioritized both culinary evolution and an interdisciplinary approach. This has allowed him to cross the established borders, and become a rebel in the kitchen.

Since he opened his first restaurant, Arrop in the coastal town of Gandía, this chef has always championed a work philosophy based on the search for the most authentic flavors of locally sourced food, with a special emphasis on fish and vegetables.

Nandu Jubany is an unconditional food-lover, a benchmark in haute cuisine and quality gastronomy and has received a Michelin star for his restaurant Can Jubany in Calldetenes, near Barcelona.

Dani García, a young, but high-profile Andalusian chef, was born in Marbella, Spain. He is now making a name for himself in the U.S. with Manzanilla, the modernist Spanish restaurant he opened earlier this year in New York City. Here, the chef shares his favorite restaurants from his coastal hometown.

Along with BiBo Andalusian Brasserie & Tapas, Dani García is responsible for the culinary experience at Puente Romano Beach Resort; two different places with two unique gastronomic offer their diners the imagination, innovation, and experience of the chef.

Osnabrück, in Germany's North Western corner, houses one of Germany's best restaurants: La Vie. Thomas Bühner, Head Chef, has worked hard to ensure his cuisine embraces the product. His flavours are extremely clean, he intensifies the flavours that are already there. The menus presented in La Vie are not just a collection of different meals, but a symphony.

From the age of seven, Pascal Barbot knew he wanted to be a chef. Raised in the small town of Auvergne in central France, he spent time harvesting vegetables in his father's garden and watching his parents prepare traditional regional cuisine.

Barbot earned the prestigious Best Cook in France Award in 2005.