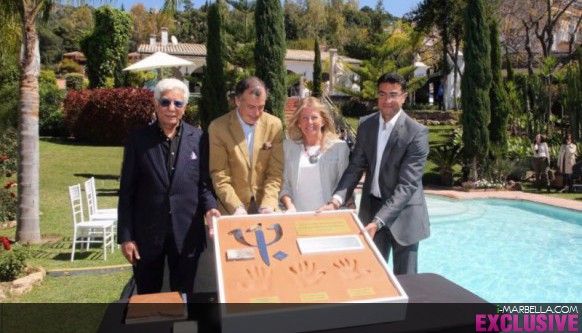 
The first stone of the Don Miguel Hotel was placed by Ángeles Muñoz yesterday Thursday 19th of April as a symbolic act for Marbella. Club Med returns to Spain with a new Resort in Marbella for the next summer of 2019.

After having been present in Spain since 1950, with the first Club Med Alcudia Beach in the
Baleares, Club Med is delighted to return to Spain with the property owner Magna Hotels & Resortto turn Marbella into the best all-inclusive family Resort in line with the standards of Club Med new upscale repositioning strategy.

For Magna Hotels & Resorts and Club Med, this project accounts for a total investment of nearly 72 million euros.

Renovation work of the existing building and of its 486 rooms began in April; the opening is
planned for July 2019.

This project will create 300 direct jobs and about as many or even more indirect jobs.

"The strategic alliance between Club Med and Magna Hotels and Resort will have a great economic and promotional impact for the municipality: Said Angela during her speech.

"Putting the first stone of the Don Miguel hotel is a very symbolic act for #Marbella. It's a satisfaction and a joy to have done it surrounded by the neighbors and the entire Club Med team, to which I only have words of thanks for trusting in the project and for this alliance which is a very important achievement for our city".

We want to show our greatest appreciation and gratitude to Ángeles Muñoz for her hard work and commitment. With the new opening of the Club Med in Marbella will increase on local suppliers a greater economic and impact in the city and all Andalusia area.

A moment of the stone placing ceremony held yesterday.
First opened in 1975 and then closed since 2004. The old hotel Don Miguel will reopen in July 2019 as a family resort managed by Club Med and Magna Hotels & Resort, will house between 300,000 and 400,000 guests a year and will create a total of 300 direct jobs and more of 1,000 indirect. The renovation works have started with the symbolic placement of the first stone, an act that has taken place today with the assistance of the mayor, Ángeles Muñoz; the founder of Magna Hotels and Resort and its president, Dokali Megharief and Jihad Megharief, respectively, and the president of Club Med, Henri Giscard d'Estaing.

The CEO of Magna Hotels & Resorts, who begged the neighbors for patience during the renovation phase and thanked the city for its support for the project, underlined that with the symbolic placement of the first stone, the conversion of the Marbella establishment started. «A high-end family hotel». For this, almost 72 million euros will be invested in total.

The owner company expects to receive between 300,000 and 400,000 guests a year in its facilities with views of the sea and the mountains. An objective that he expects to achieve thanks to a travel companion with more than six decades of experience in the management of all-inclusive family hotels.

With this new establishment, Club Med, which operates 70 resorts of four and five stars in 26 international destinations, returns to Spain and the objective, according to its president, Henri Giscard d'Estaing, is to convert the Marbella hotel into the flagship of the company in the country. Attributes will not be lacking to the establishment to conquer this goal. The president of the French group highlighted its location, with easy access, just 30 minutes from Malaga airport, «ideal for international clients», who will stay in a complex whose design will be inspired by powerful «Spanish cultural themes».

This completely renovated Resort will host a family clientele due to its comprehensive range of childcare from 4 months to 17 years and will offer a wide variety of sports, wellness, and cultural activities, valuing the Andalusian way of life.

Several people attended such symbolic ceremony that took place in the old hotel, Don Miguel
Club Med-Magna Marbella will operate 11 months a year under the all-inclusive formula for families and will have an infrastructure to accommodate groups, thanks to its new meeting and event facilities. It will maintain the same number of rooms, 486, so the hotel plant in Marbella will expand its offer in a thousand beds.

The presidents of Magna Hotels & Resort and Club Med, for their part, thanked the City Council for their support for a project that aims to convert the old hotel Don Miguel "into the best all-inclusive family resort of the Costa del Sol and of all Spain. " They have specified that the total investment will exceed 72 million euros and have detailed that the establishment will settle on a land of 125,000 square meters, will have 486 rooms, several restaurants and bars, a spa, a business center and events for 1,000 people and 60,000 square meters for sports facilities that will include 11 tennis courts, among others.

They have highlighted "the generation of employment and wealth" that will mean the reopening of the hotel for the municipality, since only in its construction phase will create more than 600 jobs, and have expressed their willingness that many of the activities offered by the establishment are supplied by local suppliers.

These statements took place in the festive act of laying the first stone attended by, among others, members of the Municipal Corporation of the PSOE PP and IU, with the mayor Ángeles Muñoz at the head.

Club Med, the largest network of all-inclusive resorts in the world, is immersed in a global expansion plan that includes the opening of 20 new resorts by the year 2020.

Founded in 1950 by Gérard Blitz and Gilbert Trigano. Club Med is the inventor of the all-inclusive holiday concept and children’s club, with the launch of Mini Club in 1967. Driven by a pioneering spirit, Club Med is a true discoverer of the world’s most beautiful destinations and sites.

Club Med is the worldwide leader in premium all-inclusive holidays with French know-how targeted at families, couples, and friends.

About MagnaHotels & Resorts
Magna Hotels and Resorts S.L. acquired the World famous Hotel Don Miguel in Marbella, Spain in 2012. The company is a member of an International group that specializes in executing innovative projects focused on Real Estate Development, Asset Management, and Hospitality business.

Mayoress of Marbella Ángeles Muñoz welcomes all participants of IRONMAN 2018