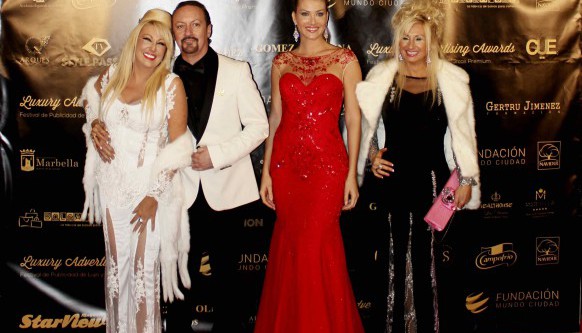 
The Luxury Advertising Awards Gala a festival full of glamour.

The fourth edition of Advertising Festival Luxury and Premium Brands, Luxury Advertising Awards, took place on December 2, 2016 in Marbella in the beautiful setting of the Congress Palace, seat of the previous editions. A spectacular auditorium which hosts this event each year to more than 600 guests.

Mireia Lalaguna, the current Miss World, she will be honored at the Luxury Advertising Awards gala.

Mireia Lalaguna is 23 years old and she was born Sant Feliu De Llobregat (Barcelona) who now devotes her time and her image as Miss World to travel the world and show up at events for raising money for social projects.

Mireia Lalaguna was crowned the most beautiful women in the world among 113 candidates. She has made history for spain and the world.

Since its inception in 2013 the awards gala Luxury Advertising Awards Festival Advertising and Premium Luxury Brands, is held in the main auditorium of the Palace of Congresses of the city of Marbella. A spectacular setting where each edition more than 600 people between winners, VIPs, guests and press have enjoyed the most exclusive advertising festival.

Historically, we have seen great personalities on social, political, cultural or sports have chosen the city of Marbella, its beaches, its atmosphere and environment as an idyllic setting for your vacation. This condition is exclusive and glamorous place which makes it ideal for Marbella Luxury Advertising Awards, festival advertising and luxury headquarters.

Since its first edition the festival and the city of Marbella have a special relationship, a prominent being a world leader style most exclusive and glamorous life. Its cultural, natural wealth and quality of life have attracted over the years millions of tourists and visitors, many of whom have been captivated by the city establishing residence there.