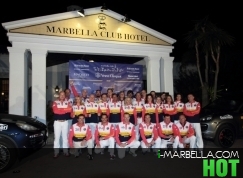 
Eugenia Martínez de Irujo and Luis Medina were in attendance to show their support and raise money for charity.

On Friday 12th April at 13.30 there was a very special Charity lunch at the Marbella Club Hotel’s legendary Beach Club to announce the winners of the Spring Games and raise money for good causes. Amongst the VIP guests were a number of famous faces including; Eugenia  Martínez de Irujo, Luis Medina, Antonia Dell´Atte, Manolo Santana and Claudia Rodríguez, Gunilla Von Bismarck and Luis Ortiz, Beatriz D´Orleans and Tomás Terry.


All profits from the lunch will be donated to Fundación Deporte y Desafío, a non-profit organisation which helps mentally and physically disabled people integrate with society through sport.  There was also a high profile auction in aid of Fundación Pequeño Deseo (Little Wish Foundation) organised by one of their most high profile supporters: Eugenia Martínez de Irujo and hosted by Chairman of Sothebys Spain, Flavia Hohenlohe. Auction items included Valentino Rossi’s watch, Sebastian Vettel’s helmet and a package of three nights’ accommodation at the Marbella Club, El Lodge in the Sierra Nevada, Hotel Puente Romano, skiing, golf, padel tennis and meals included.


The Spring Games is an intense day of competition which brings together 24 International participants to compete from sun rise to sun set in eight sports including snow skiing, karting, golf, polo, shooting, archery, waterskiing and padel tennis. The Marbella Club has been central to the Spring Games since the founder of the hotel came up with the idea in the 1960s. His nephew Pablo Hohenlohe brought his uncle’s concept back to life four years ago and so it was only fitting that the games begin and finish at the hotel. At the lunch Pablo Hohenlohe expressed his thanks to the main sponsors of the Spring Games for their important contributions to the event’s success. Sponsors include the Marbella Club Hotel, Veuve Cliquot, Hackett, Audemars Piguet (official time keeper) and Guarnieri / Porsche.

Franck Sibille, Director General de Marbella Club Hotel Golf Resort & Spa commented; “We are delighted to host the Spring Games in the Marbella Club once again. This unique sporting event and charity lunch is an excellent way to both honor the legacy of our Founder, Prince Alfonso, and demonstrate the wide variety of sports you can enjoy in Marbella. We would also like to thank the current owners, the Shamoon family, for their desire to make the dreams of Prince Alfonso a reality and keep the legend alive.”

Prince Alfonso’s son and Olympic skier Hubertus Hohenlohe presented the awards and commented “Everyone who competes in the Spring Games is a hero, Pablo chose a slope in the Sierra Nevada that even the Spanish Ski Federation said was too difficult, but they did it. I think they should all get t-shirts to say I survived the Spring Games! Congratulations to all the participants and of course the worthy winners.”

The 2013 participants and winners were:
#04 Matias Villarroel – Winner of the 3rd prize in the male category