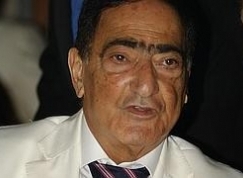 The leader of the consortium that ‘rescued two of Spain’s top luxury hotels David Shamoon has died aged 83. He had been suffering from pneumonia.

The Iraqi born property tycoon used his extensive business contacts to takeover the iconic Marbella Club Hotel and Puente Romano Hotel in 1993 and restored them to their former glories after they had lost their way and much of their A list trade.

Both had been honey traps for the international Jet-set in Marbella’s early heyday as a destination for the world’s glitterati Audrey Hepburn, Cary Grant and Grace Kelly were just some of the guests at the Marbella Club.

The investment group, with Shamoon firmly at the helm, is thought to have pumped around €40 million into turning the hotels round, and later building the Marbella Club Golf Resort.

He initiated major improvements and refurbishments that turned the hotels into two of the most emblematic luxury spots on the Costa del Sol. He was also a major player in the luxury real estate market and the golf industry on the Costa del Sol, as well as having extensive world wide business interests. Shamoon died of pneumonia, and his body was flown to London for a traditional Jewish funeral.