Last Year’s Reality Star Finalists – where are they now? 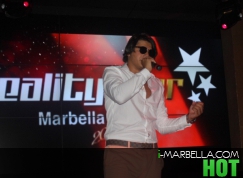 Winner of the Reality Star Prize, Salome Simone, participated at the biggest International Song Contest ‘’Sunshine Steps 2012‘’ in Monte Negro. She is an amazing talent, singer, model and dancer and is hotly tipped to succeed.

Karin Sorief – Became a finalist whilst still a student at Sotogrande International school and was a firm favourite of the audience. Since competing in Reality Star she has been performing at shows, galas and events on the Costa del Sol, and will be starting a degree in music and performance in London. In November she performed at the MusicBox 2013 Awards ceremony, one of Russia’s events for the music industry in Moscow’s Kremlin.

Jani Izoria – Amazing young tenor from Georgia was a sensation in last year’s competition and now lives in Italy and is managed by RS Productions.

This will be a fantastic show, showcasing the best new talent in a stunning environment, and it’s a great winter evening out for all the family. Tickets are on sale for 20€ from www.reality-star.com.